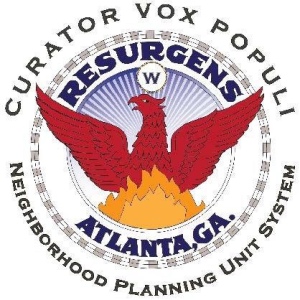 As this was briefly brought up at the November NPU-W General Meeting, here are more details in a letter from APAB President, Debbie Skopczynski.

The Atlanta Planning Advisory Board is the umbrella organization for the 25 Neighborhood Planning Units in the City of Atlanta. Its general body meets monthly to discuss and debate issues that impact the citizens of Atlanta.  For the last several years, APAB has expressed concern that the franchise agreement between the City of Atlanta (CoA) and Comcast Cable Communications, LLC does not adequately serve the interests of Atlanta residents. We ask that the following matters be resolved prior to finalizing negotiations and execution of the contract now under review:

1.     City Utilities Committee (CUC) should include Community Engagement and public input prior to any finalization.  This allows your constituents an opportunity to weigh in.

2.     Notification of public hearings should include a timeline that allows Atlanta residents to research and prepare rather than the 24-hour notification, previously issued.  This would further CUC’s community engagement efforts.

3.     APAB calls upon the City of Atlanta’s Professionals Services, i.e. legal, auditing, construction management, etc. to offer input, while applying due diligence in order to meet the objective of, what’s best for Atlanta residents.

4.     Detail a clear City of Atlanta internal structure detailing fiscal management and responsibilities for not only Comcast but all CoA Franchise Agreements.

5.     APAB asks that the finalization and execution of the Comcast Franchise Agreement process should be slowed, until the above mentioned matters are addressed and that final agreement be deferred until the COA auditing Department has been completed in February 2020.

APAB’s General Body has found it troubling that audits have not been performed to confirm Comcast’s payments to CoA’s have been accurate.   Comcast’s reluctance to allow auditors to only go back 3 years is also troublesome.  Shared best practices from the cities of Seattle, Pittsburgh and others should be examined by the Law Department, CUC and other departments prior to an agreement being finalized.